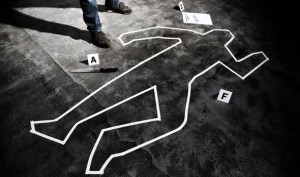 The criminal defense lawyers at Arnesen Law represent clients accused of a myriad of assault and threat-related offenses, some of which include murder (homicide), felony battery, and stalking. Our seasoned attorneys represent clients in jurisdictions throughout South Florida, including Palm Beach Gardens, Wellington, and Royal Palm Beach.

With a practice focused entirely on serving clients charged with criminal and DUI offenses, the lawyers at Arnesen Law have accumulated a wealth of experience, developing specifically-formulated techniques to handle these cases. In fact, the firm’s founder, Jay Arnesen, honorably retired from the police force after nearly losing his life while on duty. He now dedicates himself and his practice to ensuring that every one of his clients receives the vigorous defense they deserve.

With offices conveniently located in Boca Raton and Fort Lauderdale, Mr. Arnesen and his team are readily available to clients facing charges in all of South Florida. Contact the offices of Arnersen Law anytime at 561-419-9630. Our lawyers are always pleased to provide initial legal consultations free of charge.

Murder is considered one of the most egregious crimes under Florida Law, which details these charges in Chapter 782, Section 4 of the Florida Statutes. In fact, certain defendants convicted of murder in Florida can be sentenced to the death penalty, if not a life-long term of imprisonment, per the dictates of this statute. Specifically, Section 782.04 sets forth:

1. When perpetrated from a premeditated design to effect the death of the person killed or any human being;
2. When committed by a person engaged in the perpetration of, or in the attempt to perpetrate, any:

a. Trafficking offense prohibited by s. 893.135(1),
b. Arson,
c. Sexual battery,
d. Robbery,
e. Burglary,
f.  Kidnapping,
g. Escape,
h. Aggravated child abuse,
i.  Aggravated abuse of an elderly person or disabled adult,
j.  Aircraft piracy,
k. Unlawful throwing, placing, or discharging of a destructive device or bomb,
l.  Carjacking,
m.   Home-invasion robbery,
n. Aggravated stalking,
o. Murder of another human being,
p. Resisting an officer with violence to his or her person,
q. Aggravated fleeing or eluding with serious bodily injury or death,
r. Felony that is an act of terrorism or is in furtherance of an act of terrorism; or

3. Which resulted from the unlawful distribution of any substance controlled under s. 893.03(1), cocaine as described in s. 893.03(2)(a)4., opium or any synthetic or natural salt, compound, derivative, or preparation of opium, or methadone by a person 18 years of age or older, when such drug is proven to be the proximate cause of the death of the user,
is murder in the first degree and constitutes a capital felony, punishable as provided in s. 775.082.

(2) The unlawful killing of a human being, when perpetrated by any act imminently dangerous to another and evincing a depraved mind regardless of human life, although without any premeditated design to effect the death of any particular individual, is murder in the second degree and constitutes a felony of the first degree, punishable by imprisonment for a term of years not exceeding life or as provided in s. 775.082, s. 775.083, or s. 775.084.

(3) When a human being is killed during the perpetration of, or during the attempt to perpetrate, any of the crimes listed under subsection (1) of this section, by a person other than the person engaged in the perpetration of or in the attempt to perpetrate such felony, the person perpetrating or attempting to perpetrate such felony commits murder in the second degree, which constitutes a felony of the first degree, punishable by imprisonment for a term of years not exceeding life or as provided in s. 775.082, s. 775.083, or s. 775.084.

(4) The unlawful killing of a human being, when perpetrated without any design to effect death, by a person engaged in the perpetration of, or in the attempt to perpetrate, any felony other than any of those listed under subsections (1) and (2) of this section, is murder in the third degree and constitutes a felony of the second degree, punishable as provided in s. 775.082, s. 775.083, or s. 775.084.

As stated above, murder can be classified as a capital felony, a felony of the first degree, or a felony of the second degree, depending on the circumstances of the specific case.

Capital Felony Murder: sentences vary based on the determination of the court in the separate sentencing proceeding mandated under Sections 921.141 and 921.1401 and may result in the death penalty, life-long imprisonment without parole, or at least 40 years in prison (see below).

First Degree Felony Murder: mandatory minimum term of 16 ¾ years in prison, maximum sentence of life in prison, possibility of life-long parole, and fines not to exceed $10,000

A murder conviction can mean decades in prison, if not the rest of your life, or even a death sentence. The attorneys at Arnesen Law have the skills and the drive necessary combat the State’s case against you. If you or a someone you love has been charged with murder in South Florida, call us any time, day or night, at 561-419-9630 for a free consultation.