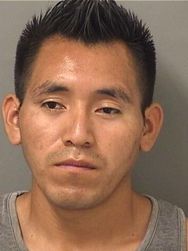 Police recently arrested a West Palm Beach resident, charging him with aggravated battery, after he allegedly punched his sister and then hit her with a chair during a domestic dispute.

According to officials from the West Palm Beach Police Department, 25-year-old Marvin Lopez Gabriel was the man responsible for the aforementioned assault. The victim’s child reportedly notified police after hearing her mother yelling for help during the incident. When officers arrived on the scene, they saw the woman bleeding from her nose. When they questioned Lopez Gabriel outside of the home, he told police that everything was fine, but was subsequently arrested.

According to the victim, who is Lopez Gabriel’s sister, the incident occurred in the kitchen and she is not aware of what caused her brother’s alleged aggressive behavior. In terms of the sequence of events, the woman said that Lopez Gabriel began yelling at her, punched her in the nose, knocking her to the ground, and then picked up a chair and hit her with it. Shortly thereafter, she was transported to Good Samaritan Medical Center, where she was treated for her injuries.

Lopez Gabriel is currently being held on $5,000 bail at the Palm Beach County Jail for charges of aggravated battery. He will be subject to severe penalties if ultimately found guilty. Aggravated Battery, detailed in Florida Statute Section 784.045, is typically graded as a second degree felony, punishable by up to 15 years in prison, 15 years of probation, and fines amounting to $10,000. In this case, the defendant is facing these more serious charges, as opposed to simple battery charges, because he allegedly used what has been deemed a “deadly weapon” during the commission of the crime.